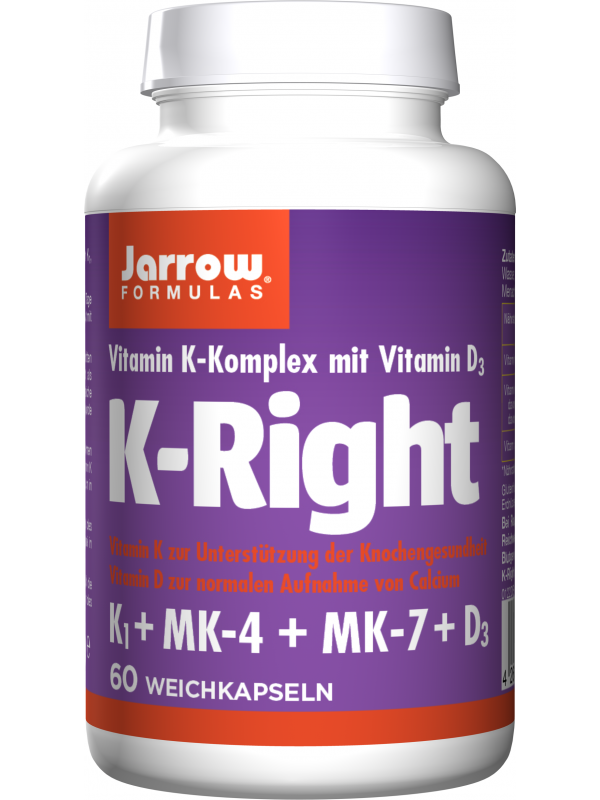 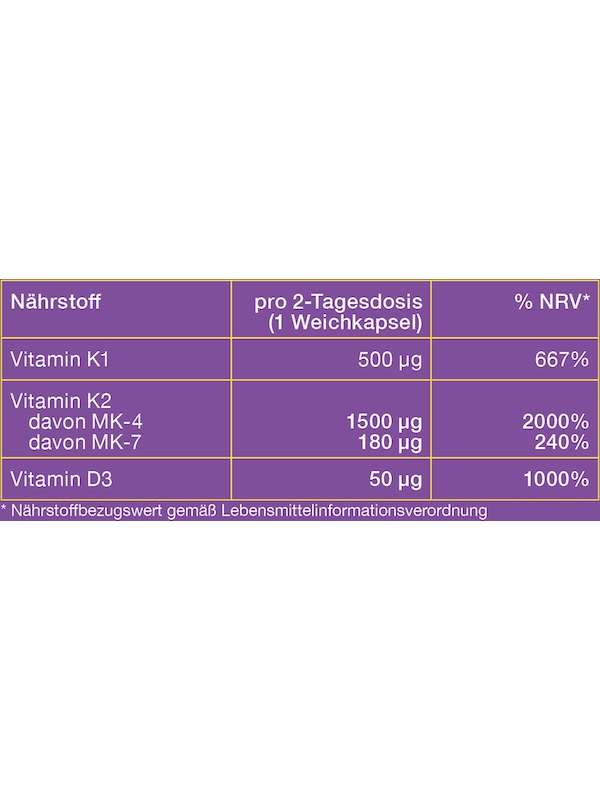 The Quartett for an optimal bone health with vitamins K1, K2, K4 and the sun vitamin D. 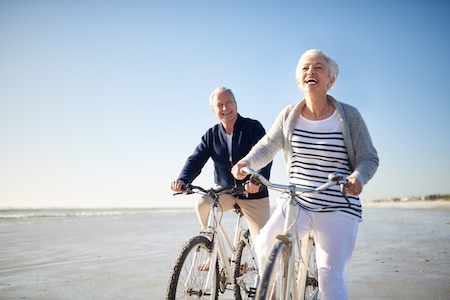 K-Right is a dietary supplement with high dosages of vitamin K1, K2 and vitamin D, to support your health based on the newest nutrition physiological knowledge.

Vitamin K and vitamin D are both fat-soluble vitamins and should therefore be taken together with a fatty meal, like plant oils or butter to be absorbed optimally. Vitamin K1 (phylloquinone) is found in spinach and other green vegetables. The vitamin K2 compound menaquinone-4 (MK-4) is formed from the vitamin K1 absorbed by the body. Since menaquinone-7 (MK-7) of vitamin K2 is of bacterial origin, fermented foods such as fermented soybeans or fermented cabbage (e.g. sauerkraut) are particularly rich in vitamin K. However, fermented foods are generally not consumed as frequently in Europe compared to Asia. Furthermore, the bioavailability of vitamin K1 from the vegetables is not very high, leading often to an insufficient intake of vitamin K in our latitudes.

Vitamin D, on the other hand, can be absorbed through food as well as synthesized by the body. The vitamin is formed during several metabolic pathways starting with the transformation of cholesterol due to UBV radiation in the skin. The active vitamin is transported to the various tissues and organs in the body, where it can reach its full health-promoting effects together with the vitamin absorbed through the diet. In the diet, animal products are especially rich in vitamin D.

Together, vitamin K and D act synergistically in the body, which can have beneficial effect in the bone metabolism. Vitamin K is essential for the carboxylation of osteocalcin, while vitamin D is important for the production of vitamin K-dependent proteins. The two most important are the above mentioned osteocalcin, which binds calcium in the bone, and the second one is the vitamin K-activated matrix Gla protein, which inhibits calcification in the soft tissues (such as the arteries). Vitamin D increases the levels of these two proteins, which results in more calcium being stored in the bones instead of accumulating in the soft tissues, like e.g. the arteries. Studies researching this effect, have shown that vitamin K can contribute to normal blood clotting and thus can support cardiovascular health.

Due to the increasing life expectancy and the aging population, the frequency of age-related bone loss is rising. The reason is the natural process of bone loss, which overcomes bone formation with increasing age. This can lead to microarchitectural damage to the bone tissue and the clinical consequences: Osteomalacia (= softening of the bone), osteopenia (= reduction of bone density) and osteoporosis (= bone loss). Since vitamin K and D influence the production of osteocalcin and the activation of vitamin K-dependent proteins, a deficiency may be associated with an increased risk of osteoporosis and fractures. A higher status of vitamin K and D is therefore linked to a higher bone density in adults and children.

Take 1 softgel every other day or as directed by your qualified healthcare professional.

Do not use if taking anticoagulant drugs or other medication. If you have a medical condition, are pregnant, lactating, trying to conceive, under the age of 18, or taking medications, consult your healthcare professional before using this product.

No wheat, no dairy, no egg, no fish/shellfish, no peanuts/tree nuts.

No customer reviews for the moment.

Only users who already bought the product can add review.