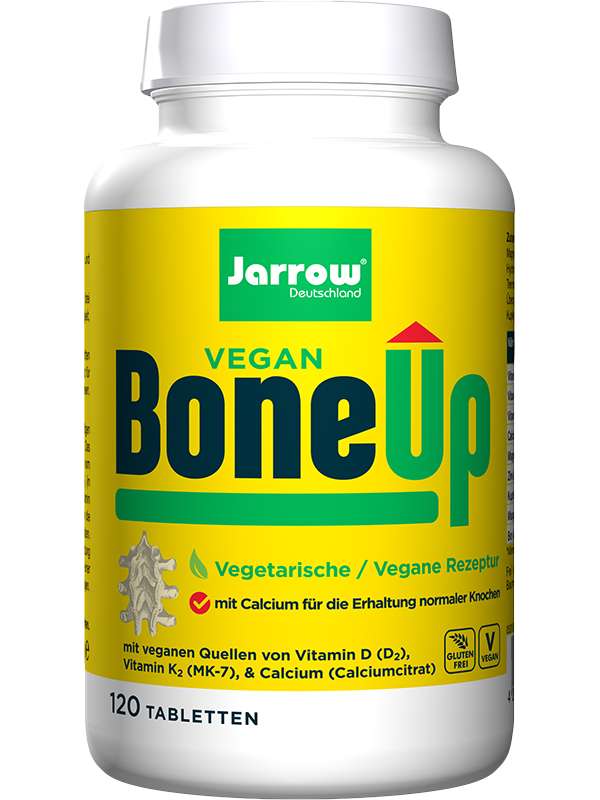 120 Tablets with calcium and magnesium, the vitamins C, D and K, and zinc, copper, mangenese and boron.

The new vegan formula – with calcium for the maintenance of normal bones. 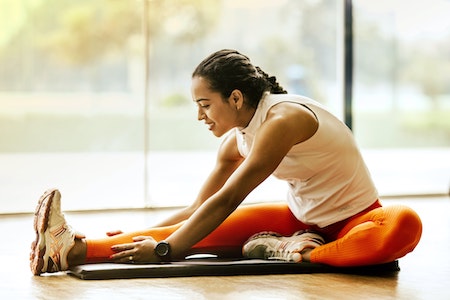 The human skeleton has at least 270 different bones at birth. By adulthood this number has decreased to 206 as several of the young bones unite and then grow together. Even if the number of bones remains the same afterwards, the skeleton changes continuously.

Between 2 – 4% of the skeleton is normally broken down and rebuilt each year by the osteoclasts and osteoblasts. With age, however, resorption and formation of the bones can lose their balance. This is particularly common in women between the age of 45 and 75, who may experience a decrease in bone density due to the reduction in estrogen levels. The bone density in women can drop up to 30%, while it is 15% in men.

The human skeleton accounts for an average of 14% of the total body weight. Approximately 1,200 grams are calcium alone, which makes it one of the most important nutritional component for maintaining healthy bones. However, according to the Nationale Verzehrsstudie II (National Consumption Study, [NVZ II], 2008), 50% of the population does not achieve the daily intake of calcium. A diet rich in sugar and animal protein, as well as the consumption of caffeine and alcohol, as is it common in Western diet, can also bind the calcium and withhold it from the bones that need it. Vegan Bone-Up therefore contains more than 100% of the recommended daily dosage of calcium. Due to its high solubility, the calcium citrate has a good bioavailability and can be absorbed directly by the body.

Due to the scientifically proven effects of calcium in the body, the European Food Safety Authority (EFSA) has approved several health claims. Calcium is for example needed for the maintenance of normal bones and may reduce the loss of bone mineral in postmenopausal women. Low bone density is a risk factor for the development of osteoporotic bone fractures.

Magnesium is another important mineral for bone health and contributes to the maintenance of normal bone. 60% of the magnesium stored in the body can be found in the bones. However, according to NVZ II, up to 29% of the population do not reach the recommended daily intake. Magnesium can have an effect on the level of the parathyroid hormone (PTH), which regulates the calcium balance and can therefore, have an indirect effect on the bone metabolism. Magnesium also plays a role in the conversion of nutritional vitamin D to the active form calcitriol.

Calcitriol is formed in the kidneys from vitamin D2, which is also an ingredient in Vegan Bone-Up. Vitamin D contributes to the normal absorption and utilization of calcium and phosphorus, which are essential elements for the production of hydroxyapatite, a bone mineral. Vitamin D also stimulates the synthesis of the peptide hormone osteocalcin, which has an influence on bone mineralization and calcium homeostasis.

Vitamin K is essential for the carboxylation and activation of proteins that are required for bone formation. The calcium present in the blood is transported into the bones by these proteins and therefore does not settle in the arteries. Vitamin K2, especially in the all-trans form of menaquinone-7 (MK-7), has a high bioavailability and can therefore be absorbed directly by the body. In contrast to vitamin K1, vitamin K2 has a longer half-life and stays in the metabolism longer. Both vitamin K and D in Bone-Up are produced by fermentation and are therefore 100% vegan.

Zinc and manganese are only present in small amounts in the bones and are essential components of various enzymes that maintain the activity of the bone-forming cells, the osteoblasts. Both trace elements contribute to the maintenance of normal bone.

Vitamin C contributes to normal collagen formation for normal bone function. Collagen is the connective tissue that makes up about 1/3 of the bone weight and ensures the flexibility and longevity of the bones. Vitamin C also contributes to the normal functioning of the immune and nervous system.

Copper also contributes to the maintenance of normal connective tissue, since it is a component of the enzyme that is responsible for strengthening the collagen fibers.

The first bottles of Bone-Up with the original recipe were launched in the United States over 20 years ago. But just like our bones, this formula has changed over and over again and has been upgraded according to the latest scientific findings. The latest study results on bone health are always reflected in the current formulation of our Bone-Up. Bone-Up has been the market leader in the USA for many years and it is finally available in Germany with a new vegan formulation.

Take 2 tablets 3 times per day (for a total of 6) with meals to facilitate maximum absorption.

No wheat, no soybeans, no dairy, no egg, no fish/shellfish, no peanuts/tree nuts.