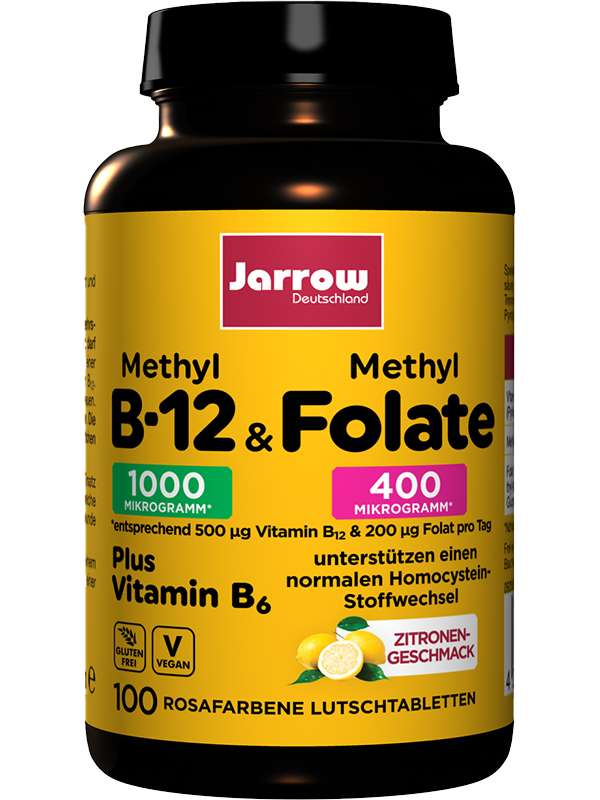 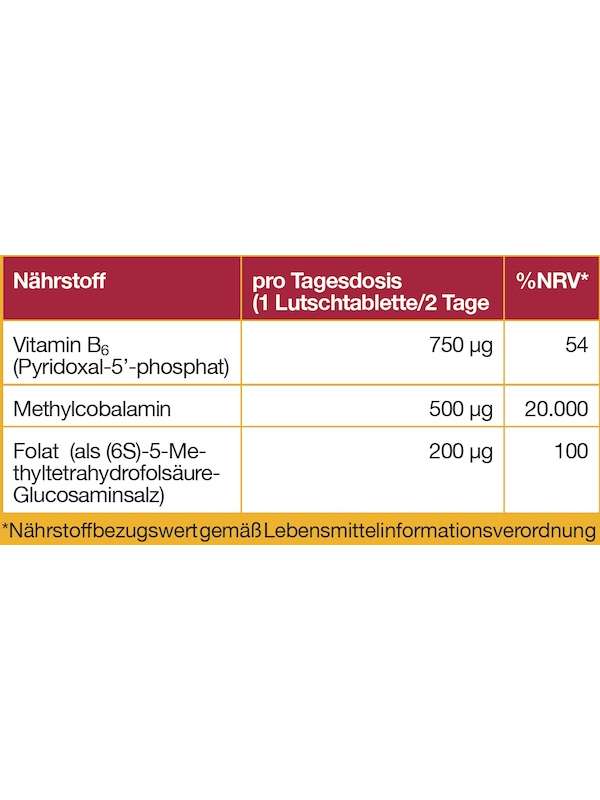 Dietary supplement with the vitamins B6, B9 and B12 – with the natural sweeteners stevia extract and xylitol.

100 lozenges with methylcobalamin, folate and pyridoxal-5-phosphate.

The Trio to support the homocysteine metabolism with vitamins B12, B9 and B6.

The three B vitamins methylcobalamin (vitamin B12), methylfolate (vitamin B9) and pyridoxal phosphate (vitamin B6) are part of the B-vitamin complex, which is important for the energy metabolism in the nervous system, including the brain.

Vitamin B12 or cobalamin can predominantly be found bound to proteins in animal-based foods. In order to be absorbed after ingestion by the intestinal mucosa, the vitamin must be linked to the so-called intrinsic factor (IF) in the stomach. If the intrinsic factor isn’t available to a sufficient degree or isn’t working properly, the body can only absorb a small fraction of the ingested vitamin. Once passed this barrier, vitamin B12 contributes to a normal cell division and homocysteine metabolism.

(Methyl-)Folate contributes to many important metabolic processes, like the synthesis of phospholipids and the hormone melatonin. In order to work properly in the body, folate must be converted into the active methyl folate form 5-MTHF. In this product, only the active form Methylfolate can be found, so it can unfold its effects in an optimal way in the body.

Compared to the other two vitamins, vitamin B6 occurs ubiquitous and can be found in many plant- and animal-based foods. After the ingestion via food, vitamin B6 can be absorbed throughout whole intestine. Afterwards in can develop its positive effects, especially in the energy metabolism and the regulation of hormone activity.

By combining these three vitamins, a complementary effect is created, for an optimal performance of these vitamins in the homocysteine metabolism and psychological functions.

During the production of our supplement we not only pay attention to an optimal combination, but we also look for the most natural ingredients. Therefore, the vitamin B trio contains the natural sweetness of the stevia plant, xylitol from birch or beech wood and natural lemon flavor.

Dissolve in mouth or chew 1 lozenge once every other day or as directed by your qualified healthcare professional to meet the daily recommendation of 500 µg vitamin B12. Do not exceed the recommended daily dose. Excessive consumption may produce laxative effects.

Healthful diets with adequate folic acid may reduce a woman’s risk of having a child with certain brain or spinal cord defects.

No wheat, no soybeans, no dairy, no egg, no fish/ shellfisch, no peanuts/ tree nuts.


Only users who already bought the product can add review.