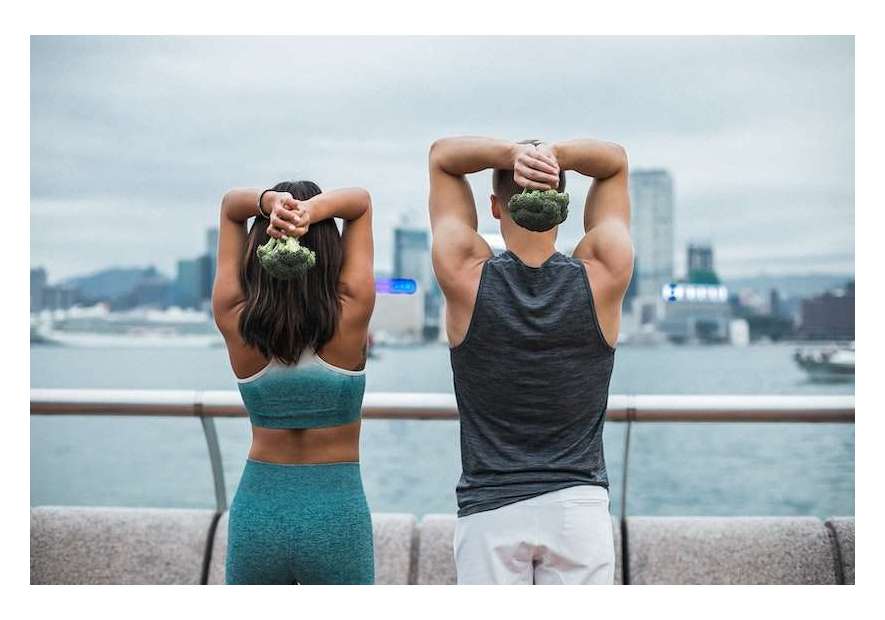 Every now and then a new article comes along, describing how healthy broccoli is and how positive it is supposed to be on the human body and especially the metabolism. But why is it so good for us and our body? Here we tried to summarise a lot of the information we found and answer a few questions about broccoli and its health-promoting effects.

Why is broccoli so healthy?

Broccoli is a type of cabbage that belongs to the cruciferous vegetables, such as cauliflower, red cabbage, kohlrabi, or radishes. In addition to many metabolism-friendly nutrients in broccoli, the secondary plant substance glucoraphanin and the yellow plant pigment quercetin are in fact the most important ones. The glucoraphanin, on which we want to focus here, is found in large quantities in broccoli seeds and sprouts, especially in Brassica oleracea L. italica. The names glucoraphane and / or sulforaphane glucosinolate (SGS) are often used as a synonym for glucoraphanin in food supplements and literature.

What is glucoraphanin and why does it have such positive effects on the body?

Glucoraphanin is a glucosinolate. Glucosinolates are natural components, containing sulfur- or nitrogen compounds formed by amino acids. They are not only the main reason for the positive effects of vegetables, but also responsible for their sometimes-characteristic bitter flavor.

However, glucoraphanin is not directly the nutrient discussed to have a health-promoting effects. The even more important secondary plant substance is sulforaphane. Sulforaphane is the active form and built from glucoraphanin and the enzyme myrosinase, which can also be found in broccoli. As soon as enough glucoraphanin and myrosinase arrive in the small intestine, the conversion into sulforaphane begins and is being continued by the bacteria located in the intestine.

What effects does sulforaphane have exactly?

Already in ancient times, broccoli, and thus sulforaphane, was believed to have a healing effect on the human body. However, it was not until 1992 that sulforaphane was first isolated and characterized. Like vitamin C or E, sulforaphane acts as an antioxidant and scavenger in the human body. Contrary to the two vitamins, sulforaphane has an indirect, and not direct antioxidative effect. It activates the body's own detox systems, which then neutralize free radicals. Free radicals can for example be formed by cancer cells. In addition, sulforaphane also has antibacterial, anti-inflammatory, and detoxifying effects.

Sulforaphane is supposed to be effective against cancer. Is that correct?

In addition to the studies at Heidelberg University Hospital, numerous other studies have been published in the recent years. They support the assumption that sulforaphane is responsible for destroying the microtubules of cancer cells. Microtubules are a protein complex stabilizing and carrying out movements inside and outside the cell. By destroying the microtubules, the cancer cell cannot divide itself anymore and the cancer can possibly be contained and hopefully be stopped (3).

According to the results of various studies, this mechanism was observed in both leukemia (4) and skin cancer (5). Glucosinolates in broccoli seem also to be able to reduce the progression of colon cancer by activating protective mechanisms (6). Former US President Ronald Reagan is said to have used this “miracle cure” in 1985, after being diagnosed with colon cancer. Acting upon the advice of his personal physicians, he is said to have done a “broccoli treatment” and lived for another 19 years after receiving his diagnosis (7).

Despite the great interest in broccoli and sulforaphane, there are still not enough representative study results. So up until now, no recommended sulforaphane dosage, neither for the preventive nor the therapeutical treatment of cancer can be made. As a result, there are still no approved health claims from major agencies such as the EFSA. However, the data so far is promising.

If I make myself broccoli for dinner more often, do I get enough nutrients?

No, unfortunately not. A high intake of broccoli and vegetables is always important for a balanced diet, but you do not automatically consume more secondary plant substances. Many types of broccoli grown today don’t contain much glucoraphanin anymore. In addition, the secondary plant substances as well as other nutrients (such as vitamin C) are sensitive to light and heat and therefore decrease during transport and storage. Furthermore, cooking broccoli at over 40 °C deactivates the enzyme myrosinase, which is responsible for converting glucoraphanin into sulforaphane. To preserve as much myrosinase as possible, broccoli should always only be steamed briefly.

A further obstacle for the absorption of sulforaphane is the gastric acid in the stomach. Unfortunately, it denatures the enzyme myrosinase before it can enter the small intestine. For the health-related effects of broccoli, it is very important that as much glucoraphanin and myrosinase as possible arrive in small intestine.

Should gently steamed broccoli be not one of your favorite vegetables, broccoli seeds or sprouts can be used as an alternative. Depending on the kind of seed or sprout, they can contain up to 100 times as much glucoraphanin as normal broccoli. Another possibility for a targeted, efficient absorption of sulforaphane are specially manufactured and standardized dietary supplements.

How much sulforaphane should I consume daily?

Unfortunately, there are no recommendations for the daily consumption of sulforaphane. So far, the study results were not significant and therefore no valid dosage for the treatment of cancer could be defined. In most studies, the daily intake was at least 90 mg sulforaphane for several weeks. During this time no side effects were reported and the sulforaphane was generally tolerated very well.

However, there are some household remedies to increase the bioavailability of sulforaphane in broccoli, which you can use at home. It is best to eat cooked broccoli with a fresh, uncooked source of myrosinase such as radishes, cress, or rocket salad. Due to the myrosinase, the glucoraphanin can be sufficiently converted into the active sulforaphane. To refine this combination a mustard and rapeseed oil dressing can be used.

What must be considered during the production of supplements, so that glucoraphanin and myrosinase are not destroyed?

In a patented process to manufacture a highly qualitative broccoli seed supplement, special conditions are created that ensure the conversion of glucoraphanin into sulforaphane is mainly going to take place in the small intestine (8). Therefore, the two broccoli components glucoraphanin and myrosinase are first extracted separately using supercritical CO2. Afterwards the two powders are combined in a vegan cellulose capsule, which has a delayed release system. This leads to a release of the capsule contents in the small intestine, where the sulforaphane can be optimally absorbed into the bloodstream.

In the first component a high percentage of glucoraphanin is extracted from broccoli seeds or sprouts, while in the second component the content of myrosinase is being optimized. This is the only way, myrosinase can be extracted while keeping its full activity and being consumed with the dietary supplement.

Temperature and pressure of the supercritical extraction processes need to be operated separately, so the individual broccoli components can be provided with their desired characteristics.

Are there any side effects or interactions between nutrients to be considered when consuming broccoli?

Since broccoli is a cabbage, temporary flatulence can be expected at high consumption and in sensitive people. However, this can be considered harmless. According to Indian tradition, indigestions can be reduced by chewing fennel seeds. During several studies, no other side effects than indigestion have been observed, even after consuming 90 mg glucoraphanin for several weeks.

Like other types of cabbage, broccoli is rich in vitamin K. The average amount is more than 100 µg per 100 g. An increased intake of vitamin K can decrease the effect of anticoagulants such as Marcumar or Falithrom. However, this should not stop you from eating such healthy foods. Instead consult your doctor and let him or her adjust the dosage of your anticoagulant after more frequent INR measurements.

In the patented extraction process described above, the material will be deoiled during the manufacturing process with supercritical CO2. This results in a very strong decrease of the fat-soluble vitamin K to an amount of less than 1 µg per daily dose. When taking an anticoagulant, it is therefore not necessary to adjust the dosage regarding this specific dietary supplement. However, should you choose to take food supplements of any kind, while also taking anticoagulants, you should always look at the manufacturing process and consider a possible vitamin K content of the product.

What are the prospects for the future?

Although the assumed health-related effects of broccoli were already known in ancient times, research in this area is still only just beginning. So, there is a lot that needs to happen before glucoraphanin and its health-promoting effects can be officially recognized. But don't you worry, as soon as there is something new in this area, we will be happy to inform you about it here.

(1) Christine A. Houghton (2019). Sulforaphane: Its „Coming of Age“ as a Clinically Relevant Nutraceutical in the Prevention and Treatment of Chronic Disease. Oxidative Medicine and Cellular Longevity.

(4) Fimognari C et al (2014). Antileukemic Activity of Sulforaphane in Primary Blasts from Patients Affected by Myelo- and Lympho-Proliferative Disorders and in Hypoxic Conditions. PLoS One; 9(7): e101991.